Velliv Foreningen (The Velliv Association) has around 340,000 members, all of whom are customers of Velliv (formerly Nordea Life & Pension).

How the association came into being

The aims of Velliv Foreningen

The association aims to ensure a strong democratic basis through members' engagement with and participation in the association's elections, bonuses and other member benefits. The association also works to promote good mental health in Denmark through charitable donations.

An important ambition of the association is to engage members in elections to the Board of Representatives, as this is a prerequisite for a thriving association democracy that reflects the members' interests.

The remaining 20% of the returns go to charitable activities that promote mental health in Denmark. Mental health issues are a particular growing challenge for Denmark. Stress related issues results in around 35,000 people being off work sick every day, added to which are symptoms of anxiety, depression, sleeping difficulty and loneliness, which have also been increasing in recent years. This has enormous welfare consequences for the individual and their family as well as major financial consequences for companies and the public sector. Norliv wants to help address this challenge through preventive efforts. 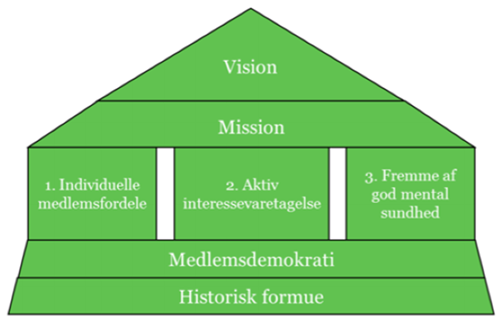 The association's Secretariat serves the association policy forums, undertakes monitoring and adjustment of asset management, provides member services and other administrative service functions, and assumes responsibility for administering and preparing charitable donations for approval by the Board of Directors.

In 2017, the association acquired a 25% stake in Velliv (formerly Nordea Liv & Pension), and in 2018 a further 45% stake which was approved by the Danish Financial Supervisory Authority in the spring of 2018. The association owns 70% of the pension company and is thus the majority shareholder in the company. In the coming years, the pension company Velliv (formerly Nordea Liv & Pension) will conduct a share buyback programme directed at Nordeas remaining shares so that Velliv Foreningen will own 100%. At that point Velliv will become a fully customer-owned company.

Due to the acquisition of Velliv (formerly Nordea Liv & Pension), the composition of the association's investments are changing and a new investment strategy is being implemented.